How to Make Cinnamon Milk For Weight Loss and Healthier Skin

Some people like to enjoy a warm glass of milk before bed to help them sleep, and adding cinnamon to the milk can provide some wonderful health benefits. Not only does cinnamon promote weight loss, but it can help to clear up the skin as well. In this article, we’ll go over some other positive benefits of cinnamon milk so you can start including it in your daily health regimen and reap the rewards of consuming this delicious beverage! We will also give you the recipe so you know exactly how to make this healthful drink. 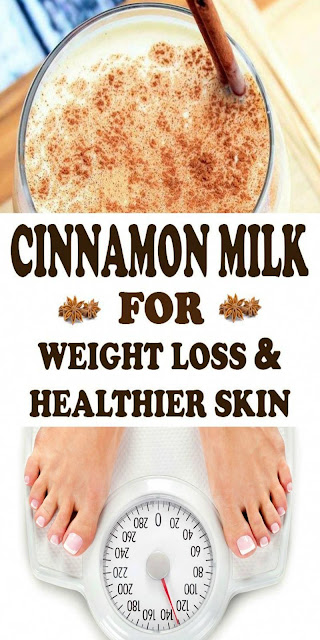 Before we get into the recipe, we’d like to go over some benefits of cinnamon that you may not have known about before. So, let’s get to it! First, some background info on cinnamon: it’s a popular spice made from the inner bark of trees and has been used for centuries, dating as far back as ancient Egypt. As the inner bark of the cinnamon trees dry, strips of the cinnamon start to curl into rolls, which can then be ground up into cinnamon powder.

Cinnamon used to be so rare and highly coveted that people considered it a gift fit for kings. These days, however, you can buy cinnamon at your local grocery store for a pretty cheap price.

There are two main types of cinnamon:

Cinnamon gets its smell and taste from the oily part of the plant, which is very high in a beneficial compound called cinnamaldehyde. Scientists believe this compound provides most of the health benefits found in cinnamon.

LOADED WITH ANTIOXIDANTS
One of the major health benefits of cinnamon is that it contains powerful antioxidants such as polyphenols. In one study comparing the antioxidant levels of 26 different spices, cinnamon came out on top, outscoring foods such as garlic and oregano. The high level of antioxidants can help protect the body against free radicals that cause diseases such as cancer.

IT’S ANTI-INFLAMMATORY
Another great reason to make cinnamon milk is that cinnamon can help with chronic inflammation. Scientists believe the incredible amount of antioxidants present in cinnamon aid in healing inflammation.

CINNAMON REDUCES BLOOD SUGAR
Studies have shown that in people with type 2 diabetes, half a teaspoon of cinnamon per day reduces levels of total cholesterol, LDL cholesterol, and triglycerides while maintaining levels of HDL cholesterol.

Another study found that 120 mg of cinnamon per day can lower harmful blood markers while increasing “good” HDL cholesterol levels.

IT REDUCES INSULIN RESISTANCE
Insulin is a hormone that helps regulate metabolism and energy use. It also helps transport blood sugar from your bloodstream to your cells so you can use it as energy. However, many people are insulin resistant nowadays due to either poor diet, inactivity, or type 1 or 2 diabetes. Insulin resistance can actually lead to the development of diabetes, as well as other health problems. Cinnamon can help to reduce insulin resistance, which will aid the body in healing its metabolism.

Several human studies have proven how cinnamon can help heal diabetes, showing that it can lower fasting blood sugar levels by a whopping 10–29%.

CINNAMON COULD PREVENT NEURODEGENERATIVE DISEASES
Neurodegenerative diseases, such as Alzheimer’s disease and Parkinson’s, cause the brain to lose the structure and number of cells present, leading to cognitive decline. However, two compounds found in cinnamon have been shown to prevent the buildup of a protein called tau in the brain, which is one of the markers of Alzheimer’s.

As you can see, cinnamon provides plenty of health benefits to the body, which makes it easy to see why cinnamon milk is such a wonderful beverage to make. We could continue with the benefits of cinnamon, but we know you all came here for the recipe, so we’ll get to the good stuff now!

HERE’S HOW TO MAKE CINNAMON MILK
It’s pretty simple – all you need to do is combine 1/4 teaspoon cinnamon powder with one cup warm milk. You can add honey or other sweetener if you desire, as well as some vanilla extract for added flavor. Serve and enjoy!

A quick note: make sure you purchase organic, lightly processed cinnamon if possible. Look out for any additional ingredients such as added sugar which will take away from the health benefits.