Home Beauty health women 10 Your Breasts Say About Your Health

10 Your Breasts Say About Your Health 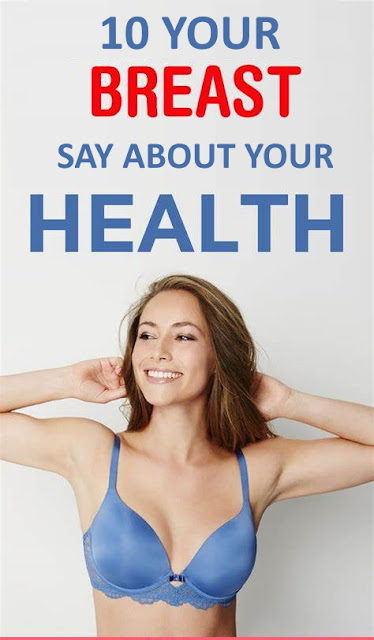 They're right there on our chest—AA or DDD, perky or pendulous, nipples pale pink or dark brown—and yet most of us don't give our breasts much thought day to day. But we should. Here's what the look and feel of your dynamic duo can tell you about your health.

If your breasts are growing, it's likely due to weight gain (because breasts are made up of mostly fat cells, in addition to glandular tissue), pregnancy (as milk ducts ramp up for breast-feeding), birth control pills, and/or hormonal changes related to your menstrual cycle (they're very sensitive to shifts in estrogen and progesterone).  No need to worry, though you might need to buy new bras.

If you find your chest shrinking, you've likely either lost weight or your estrogen levels are falling, perhaps from going off the pill or impending menopause. If you're seeing shrinkage and none of those apply (especially if you also have hair loss, acne, and facial hair), consider being tested for polycystic ovary syndrome (PCOS), which is characterized by high levels of the hormones testosterone and DHEA. Or maybe just lay off the Starbucks. A study in the British Journal of Cancer found that drinking three cups of coffee a day caused breasts to shrink in some women, with additional cups increasing the effect. The culprit is a gene shown to link breast size to coffee consumption.

If you're generously endowed, you can thank (or curse) your DNA. While some studies have linked larger cups to a higher risk of breast cancer, there's not enough evidence to cause concern. (Here are 10 things no one tells you about breast reduction surgery.) "The bottom line is that more studies need to be done before any definitive conclusions can be made," says breast surgeon Daniel Maman, MD, a plastic surgeon specializing in breast reconstruction and an assistant clinical professor of surgery at Mount Sinai Hospital in New York City.

Your shape is programmed by your DNA, but it will morph over time. "Breast shape and appearance are largely based on age and history of child-bearing and breast-feeding," Maman explains. After breast-feeding and as we age, ligaments stretch, connective tissues break down, and skin loses elasticity, causing breasts to form more of a teardrop shape (aka droop). "Lifelong good bra support is one of the few things women can do to fight the effects of gravity," Maman says. You can also avoid yo-yo dieting, as weight fluctuations stretch the skin, and do exercises such as push-ups and chest presses to build up your pectoral muscles, which firms the chest and makes breasts appear perkier. (See how to do the perfect push-up for pectoral strength.)

Throughout your menstrual cycle, your breasts may feel lumpy and bumpy, as hormonal changes cause benign cysts to fill with fluid. "In menstruating women, these fibrocystic changes are part of the normal architecture of the breast," says gynecologist Lauren Streicher, MD, an associate clinical professor of obstetrics and gynecology at Northwestern University's medical school. The lumps—which tend to show up on the sides of the breasts under the armpits and/or up front and over the nipples—may feel tender or even painful, especially pre-period, but it's not usually a cause for concern, especially if the lumps are symmetrical. As always, check with your doctor if you're worried. (Here are 7 surprising things your first period says about you.)

If you're among the roughly half of women whose breasts are dense—meaning they have more fibrous and glandular tissue—it can be difficult to accurately detect masses or tumors on mammograms. That's because dense breast tissue and cancer both show up as white on x-rays. Since having dense breasts can also mean a slightly elevated risk of cancer, at least 22 states have passed a law requiring physicians to let you know if you have them, according to the organization Are You Dense Advocacy. (Click here for 9 things that impact your breast cancer risk.) Women with extremely dense breasts should ask their doctor about further testing via MRI or ultrasound. In the meantime, get to know your body. "Be diligent with self-exams—know what your breasts feel like," Maman says. "Have a very low threshold to seek professional medical assistance if you feel something unusual."

There's a long list of things that can cause breast pain, and most are benign. "Bilateral breast pain—pain in both breasts—is very often hormonal or due to too much caffeine," Streicher says, since caffeine exacerbates fibrocystic changes. Other possible triggers include PMS changes, an ill-fitting bra, mild trauma to the chest wall (like from bumping into something or doing high-impact exercise), and even carrying a heavy purse on the same shoulder day after day. "Muscle wall tenderness can hang on for weeks," Streicher says. "Most people don't connect the dots." (Do you have back pain? Try this 60-second fix.)

Breast pain can also come from a deficiency in iron, which regulates thyroid hormones. In a 2004 study, half of women reduced their overall breast pain after adding 6 mg supplements of iodine, which also boosts thyroid function, to their diets. While pain in only one breast could warn of breast cancer—"people think breast cancer doesn't cause pain, but that's not true; it can hurt," Streicher says—there are a lot of noncancerous things that can cause breast pain, and they're much more common.

Inverted nipples are perfectly normal if they've always been that way. "The big issue is if you have new inversion," Streicher says. "If you've always had 'outies' and one day you have 'innies,' get to the doctor right away because breast cancer is one cause of breast retraction." (But first make sure it's not just a temporary effect from the sports bra you slept in.)  Here are 10 cancer symptoms most people ignore.

Nipple discharge is not abnormal—it can happen after s*xual stimulation—but it could signal a problem. "Most women immediately think it means breast cancer, and in some cases it does, but there's a long list of other things it could be," Streicher says. Especially when the discharge is happening on both sides, it's likely to be a hormonal issue. A common problem is elevated levels of prolactin, which could come from a medication you're taking (such as the pill or certain SSRI antidepressants), having an underactive thyroid, duct ectasia (a menopause-related shortening of the milk ducts), or worst case, a pituitary tumor. A benign tumor called a papilloma can occasionally cause a bloody discharge, Maman notes. Discharge can also just mean you're pregnant and your breasts are kick-starting the milk production factory. And milky discharge can persist for up to 2 years after you stop breast-feeding. "Most times, nipple discharge is normal but should still prompt an evaluation," Maman says, "particularly when nipple discharge is bloody, involves only one breast, and occurs along with skin changes and suspicion of a breast mass."

While more advanced breast cancers can lead to skin color changes and skin dimpling, according to Maman, color changes are usually a sign of pregnancy, when nipples and areolas may enlarge and darken. Nipples may also get darker or puffier as you age, and that's totally normal, even if it's not your favorite look.