When you are in a relationship, the only constant thought on your mind is, what is it that you can do to keep him happy. Most women settle for the obvious gifting/surprising options, which, though helpful, could get predictable. However, there are few unspoken gestures, which men quietly observe, but they could mean a world to them 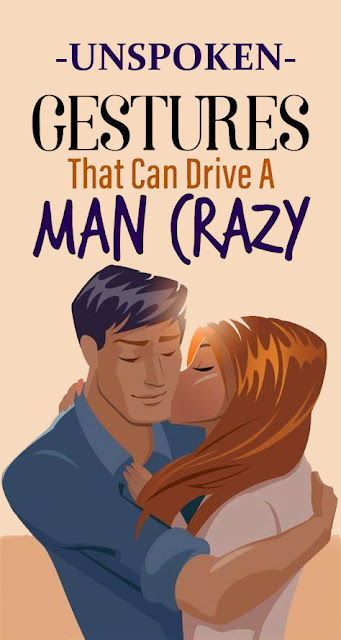 Here are a few of them, which are generally ignored but can go a long way in winning him over:

Touch the sole of his feet gently with your toes, whether you are at a dinner table or at home on a couch. The ticklish touch may make him giggle no end, but he’ll enjoy the playful moment. Ditto with your nose. Just when he’s expecting you to kiss, play with his nose or simply land a peck on it.

Men love women’s hair, but are equally conscious about their own, especially when women ruffle them. Do it on the pretext of getting something that’s stuck in his hair, drying his wet hair, or simply, just like that!

Men and sports are inseparable. Occasionally, be his “weekend” buddy with whom he enjoys competing in a board or video game, or simply watches a football/cricket match. Irrespective of which side wins, don’t forget to celebrate!.

Whenever he seeks your advice on important matters, be honest and impartial, which means you could even disagree with him. Your honesty will help build his trust in you, which is an important part of any relationship.

5. Spot Him In The Crowd

This may sound like straight out of the movies. But how often has it happened that you both planned to meet at a crowded place and searched desperately for each other. Your ability to spot him in the crowd, much to his relief, will only make you more precious to him.

Men often assume that women give too much importance to their attire or hair to indulge in some impromptu fun like getting drenched in rain. So, the next time there is a cloud burst, show him your fun side by setting that umbrella aside and dancing with him.

While women take to cooking like fish to a water, men like to show off their culinary skills too. Plan a weekend cook-out occasionally where you are not the perfect cook yourself. While he cooks up his favorite dish, make mess of yourself by soiling your hands or getting flour in your hair. He’ll love helping you clean up later.

Insecurities are part of any relationship and so are quarrels. While hugging and kissing comes naturally to a couple, sometimes indulging in some old-fashioned cuddling after a fight will help you crease out the differences. Also, so close presence will help your man feel secure about you. Put on your favorite movie, cuddle up in your couch with him, and hear him snore blissfully!

It is rare to catch men red-handed. But if you are one of the lucky few who have, we’re sure you wouldn’t have missed the cute, sheepish look on his face. He may have lied to you about a bad habit or his night out plans with his friends, but whenever he’s caught and apologizes genuinely, accept it. He’ll appreciate the fact that you gave him a fair chance.

These suggestions will help you add a spark to your relationship. Follow them and win him over, again!