Home health Skin Care Glycation: The Reason Why You Have Wrinkles And Flaccid Skin

Glycation: The Reason Why You Have Wrinkles And Flaccid Skin 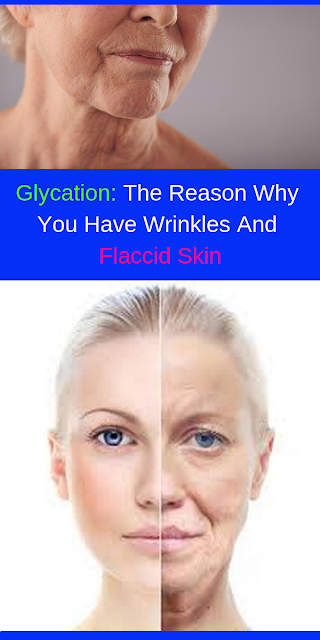 The surprising reason why you have wrinkles and flabby skin, that has a name: Glica: Every time we look in the mirror we realize that new wrinkles have come out and that the skin hangs and it is getting more and more flabby.

Glycation is the name of the main cause of aging of the skin.

What does glycation mean?

Glycation is a chemical reaction that makes us old, but what does this strange word mean? It is similar to the word glucose and is not by chance … Glycation is the result of the body’s reaction to sugars, something that is given more and more because of poor eating. We give you some explanations to understand and combat this phenomenon that contributes to skin aging.


We have been able to elucidate the mystery of glycation thanks to the study of Valérie Espinasse, doctor in pharmacy, micronutrition, nutriterapeuta and phytotherapist. What is it? Where does it come from? That makes? Can you fight? Questions to be answered in the comments of this anti-aging specialist.

Glycation is a chemical reaction that mainly operates in the dermis: the glucose molecules (sugar) present in our food react with molecular protein structures, thus generating disorganization of the dermis. On the other hand, glycation engenders larger proteins, called “glycosylated proteins”, harmful to the body, since the body can not destroy or release them.

How are the effects of glycation translated?

With age, the glycosylated proteins accumulate in the cells and end up destroying the mattress supporting the skin (forming collagen and elastin). In other words, the glucose overlaps around the collagen and elastin fibers that over time become stiffer, they could even break. This slow process affects all the proteins of the organism throughout the life and unfortunately, it is irreversible. Hence the importance of combating the phenomenon of glycation earlier, since, little by little, it damages the subcutaneous substance that supports the dermis. Result: loss of elasticity and tonicity. We can see how surface wrinkles are installed and hollowed out and how skin hydration weakens.

We can be 40 years old, be splendid and count the wrinkles with the fingers of one hand if we have a good hygiene of life … And have lots of wrinkles and flabby skin with 45 years if we do not care our body. Fighting against glycation is very easy if we pay attention and care for food. To avoid this phenomenon and its undesirable effects, bet more on steamed or slow cooking and low heat. Forget the grills, the cooking from 180 degrees and prepared sauces filled with fat.

Eat raw foods, such as fruits and vegetables that are packed with antioxidants. These latter help the body not to produce glycosylated proteins. Obviously, it decreases or even eliminates the consumption of sweets, cakes and fast sugars in general. In short, a basic diet follows, there are no better foods than others, but the way to consume them, which gives them some properties or others.

If we want to caricature the anti-aging diet of the skin, the more raw foods we eat, or the less cooked we can, the better! And above all, you have to drink water! Many times we forget it, but when water is mineral, it stimulates the collagen fibers and the elasticity of the skin … Without forgetting that it hydrates its interior and, therefore, the exterior of our body!

Carnosine, which we have known for more than a century, is naturally present in our body (in the human brain and muscles). Composed of two amino acids from the digestion of meats, it is known for its preventive properties of aging. Its most important effect is antigliction. It acts on the sugar molecules that, instead of being fixed on the collagen fibers, are fixed on the carnosine and this reduces the glycation of the proteins.

In the fight against stiffness of the tissues, carnosine helps to preserve the flexibility of the mattress supporting the skin that will retain a good elasticity and better resist the daily alterations and the appearance of new wrinkles. Your epidermis will rejuvenate!

Foods that have carnosine

If you eat cereals, legumes, nuts, fruits and vegetables, you acquire the essential amino acids so that your body then manufactures creatine and carnosine. It is true that these two amino acids are found directly in products of animal origin, so the body does not need to make them, but it does not matter too much where the amino acid comes from, whether it comes from a piece of meat or Own organism, both are good alike, although in the first case, an animal is killed to be able to get it.