7 Reasons Why Married Men Fall In Love With Other Women

A lot of us are going to dream of perfect relationships that conclude in perfect marriages with our perfect partners. But alas, the world has other plans. Perfection isn’t always going to be in the cards for us and we need to accept that we aren’t always going to be able to get what we want. We dream of one day meeting that one person who is going to sweep us off our feet; someone who is going to give us everything we have ever dreamed of. We want to fall in love with this person and hope that we spend the rest of our lives together. 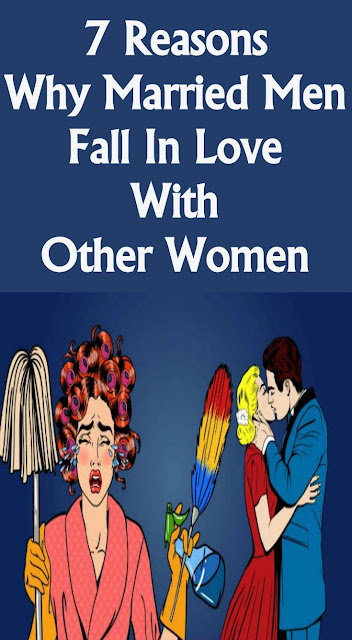 But the sad truth is that dreams don’t always come true. Our wishes aren’t always going to be granted. A lot of what we hope for will get lost in the wind; and we can feel crushed and disappointed a lot because of it all. Romantic relationships aren’t always as simple as we make them out to be; and they’re always going to require substantial effort on our part. We’re always going to have to try our best to make these relationships work. And there is always a chance that we’re going to come up short. One of the leading causes of separations and divorces in marriages is infidelity.

There are just so many spouses out there who get tempted to fall in love or develop feelings for another person; and a lot of the time, it’s the husband. But why is that so? Why is it that men still find the gall to fall in love with another girl even when they’re in a committed relationship with you? Well, there are many factors that go into an issue like this. And it’s not always going to be so simple. There are many variables at play; and it’s always going to be a case to case basis. But what this article aims to do is give you a better idea as to why a lot of men fall for third-parties; why a lot of men stray away from the proper path of relationships. Here are a few reasons married men still fall for other women.

1. He is just looking for a friend.

It’s always normal for a man to seek friendships outside of a marriage. You can’t really fault him for that. In fact, toy should be afraid if he doesn’t have friends beyond just the two of you. However, the risk you run with letting him develop friendships with others is that he might develop romantic feelings for certain “friends” as well.

2. He is too immature to get serious.

He might be married to you; but maybe he hasn’t really matured enough to the point of fully grasping the responsibility of being in a committed relationship. He might not have known what he was getting himself into when he married you; and as result, he acts out. He freaks out because he still wants to explore and discover more about himself in the dating world. Maybe you rushed into the marriage.

3. He is attracted to what he can’t have.

A lot of men are like this. In fact, a vast majority of men live for the thrill of the chase. And once they get something that they’ve always wanted, they get bored. And this might be the case with the two of you. maybe he loves the challenge of having to have a relationship with someone outside of the marriage. Maybe he’s bored of having already gotten you.

4. He likes women who are positive and happy.

Not to say that you’re not allowed to be sad in your relationship from time to time; but it’s a huge factor. All of that negative energy can have very bad impacts on him as a person. He might not like the negative relationship environment and so he will force himself to seek happiness and positivity in other women instead.

5. He wants something new to break the monotony.

Yes, there is such a thing as having TOO MUCH stability in a relationship. He might be a drama queen on the inside and he hates the fact that your marriage is too safe and easy. He might start looking for affairs just to shake things up a little bit; to add more excitement into your lives.

Maybe he thinks he just made a mistake. It happens. Perhaps the marriage has failed to meet his expectations and he doesn’t feel fulfilled at all. Maybe he’s just trying to make the most out of an unfortunate situation by staying married to you; but seeking love and meaning elsewhere.

7. He feels undervalued and underappreciated in the marriage.

Perhaps you aren’t giving him the gratitude and appreciation that he needs to feel secure in your marriage; and as a result, he’s going to look for it in someone else. And it’s unfortunate if he happens to find a woman who is willing to give him those things.