Home health Body Language Can Reveal The Truth About Your Relationship

Body Language Can Reveal The Truth About Your Relationship

People don’t realize but body language tells you a lot about a person. It essentially can reveal various secrets about someone that they might not even realize about themselves.

There’s a whole science to body language that many of us haven’t taken the time to learn about. For example, a pat on the top of the back is friendly and encouraging; something a friend might do, according to study-body-language.com. On the other hand, if someone touches your lower back it means they’re really interested in you romantically, and might even be lusting after you, according to Cosmopolitan. 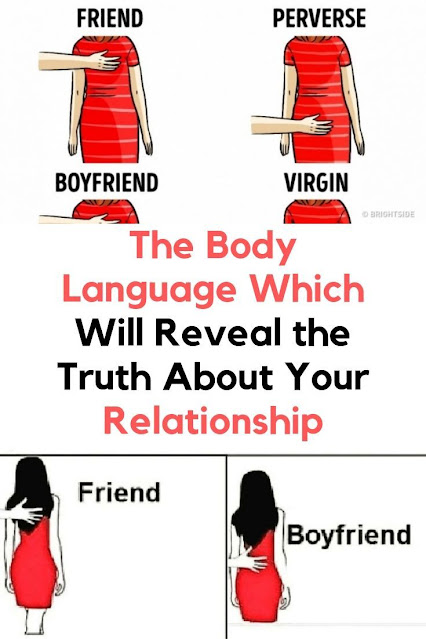 But it goes beyond the individual. Being able to read body language can also reveal a lot about the relationship that you are in with someone. For example, in your mind, it could be going really great with the person you are with, but for them…things might be a little off. Body language can reveal all that!

Here are a few signs that’ll help you understand what exactly is going on in your current relationship with the help of body language. Maybe you’re just starting a new relationship or you’ve been with the person for quite some time. Regardless, check out these signs!

1. Emphatic Eye Contact. According to luvze.com, you know if someone is really into you if there is an over-exaggeration of eye contact. I mean, every time you look up, that person is locking eyes with you. Girls try to play it more subtly, but guys? That’s typically the clear sign they are feeling you. It’s that shy, “I’m trying to not let them notice I’m staring at them” look.

2. The Way Their Feet Are Pointed. Get-a-wingman.com notes that the foot plays a very important role in reading whether or not someone is super into you. Sounds ridiculous, but it’s fairly true. The site notes that if, during a conversation, the person is super into you and into what you are saying, notice their foot. The person will always sit or stand in a way that their feet are pointed towards you.

3. How Close They Are To You. Do you ever notice when you are having a conversation with your partner, how close they are to you? You might not realize, but the distance between bodies is a pretty strong indication of attraction. Get-a-wingman says that even if you’ve been with the person for quite some time, you can use this body language to tell if they are interested in anything you are saying.

4. The Head Tilt. Science of People notes that another way to tell if your partner is into you is watching the classic head tilt. The site says that by tilting your head, it shows that you are not only interested but engaged in the conversation as well. That means, during conversation tilt your head while looking at them.

5. Public Displays of Affection. Whether you are that couple that enjoys holding hands during dinner or not, it is a huge indication if someone is into you or not. Of course, some prefer not holding hands across the table but if it does happen, it’s a pretty good sign. People have their opinions on the matter. For example, an article written for Glamournoted that holding on for the entire meal just looks awkward.

6. They Try To Make You Laugh. Psychology Today notes humor is a huge plus side to any relationship. If you can make someone you like or love laugh? Then you are good in their books. A way to tell if someone is into you is when they make a joke in a group of people, but they only look to you to make sure that you are laughing. No one else. This is a clear and strong sign.

7. They Smile Specifically At You. Guys specifically have this mysterious, masculine thing going on. But according to luvze.com, a way you can tell if a guy is super into you is if he focuses his wide smiles on you and only you. Also, guys typically start to show their wide smiles in a photo, so if he does that with you…you are good in his books!

8. Mindful Posture. The last body language sign that reveals the truth about your relationship is posture. That’s right. According to luvze.com, men specifically tend to straighten up when a girl they like walks into the room. Typically, he was slouching before you came in and now he’s standing pretty nice and tall. So watch out for that.