At the present time, cancer is the leading cause of death in nearly all countries around the world. In fact, it is to blame for over 30 percent of all deaths in Canada alone, which is much more compared to any other disease. As estimated by the Canadian and American Cancer Societies, ovarian cancer had 2800 new cases and 1750 deaths in Canada, and 22,280 new cases and 14,240 deaths in the United States in 2016 alone. 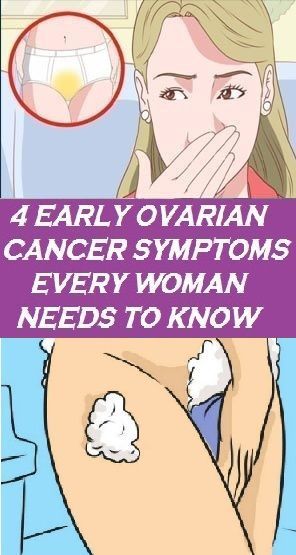 WHAT IS OVARIAN CANCER?

Ovarian cancer develops when the cells of the ovaries form tumors that become malignant. It is often referred to as “the silent killer” as it shows little or no symptoms, which are quite difficult to detect with screening. While it is most common in post-menopausal women, it has recently started affecting younger women in their 30s and 40s. According to a recent research, early cancer detection notably increases the chances of survival, so regular check-ins are must.
Unfortunately, currently there isn’t any reliable test. CA125 blood tests may give false negatives while smear tests are not capable of picking up malignant cells. There is yet another problem, though. Many of the symptoms are often mistaken for those associated with other diseases, such as irritable bowel syndrome. Consequently, the tumor gets diagnosed at stage 3, when it becomes too late.

4 SYMPTOMS THAT MAY BE SIGNS OF OVARIAN CANCER

Consistent and frequent bloating, that goes on for more than three weeks, often indicates a cancerous tumor growth.

Although menstrual cramps and pain during menstruation are normal, persistent pain that lasts for more than three weeks can be a sign of ovarian cancer. Pre-menopausal women should be especially careful, as these symptoms are often easily passed off for period pain.

A decrease in appetite that comes out of the blue and goes on for more than three weeks can be a sign of various ailments, among which stomach, intestine, and bowel issues are the most common. However, it can be a sign of cancer as well, so make sure you consult your doctor.

In case you find yourself visiting the toilet much more often than earlier, without any changes regarding the liquid intake, it is very likely that you have early stages of ovarian cancer. Another sign that indicates ovarian cancer is an urgent need to pee and inability to hold it.

Most of these symptoms can be easily mistaken for problems and diseases with the gastrointestinal tract. Therefore, if you experience any of them and you haven’t earlier, it is crucial to monitor their persistence and frequency. If they don’t subside in a few weeks, consult your doctor and get checked as soon as possible.