What The Shape Of Your Nose Tells About Your Personality 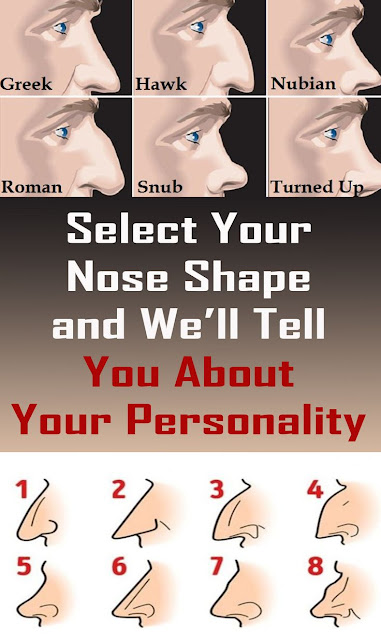 Of course, you cannot determine everything about anyone by looking at them, but there are certain features that reveal certain traits of their personality. It might sound weird to you, but it’s true. One such feature that tells about your personality is your nose. This study has also been confirmed by Professor Abraham Tamir from the Ben-Gurion University.

So, let’s find out what your nose says about you.

People with a Greek nose (long and straight nose with a narrow ridge) are supposed to be hardworking. They prefer straight talk rather than beating around the bush. They are reserved and do not wish to be the center of attention. You can consider them to be very loyal and practical. People with such noses do not open up about their feelings easily, and thus, it is a bit difficult to understand them.

This nose type is usually wide and short in length. It is quite different from the other nose types and can be recognized easily. People with the Nubian nose are considered to be very creative and passionate regarding their work. They have a lot of charisma, and thus, people enjoy their company.

The Roman nose has a small bump halfway down the ridge of the nose that points downwards at the tip. People with such noses are considered to have a strong personality. They are very strong at heart, dedicated to their work, and are very good at rallying people to take action.

This type of nose is perfectly straight and sits at an almost 90-degree angle. People with such noses are usually attractive and are considered to be dominating and business minded.

The hawk nose is very long with a bit of a hook at the tip that points downwards. The ridge of the nose is very prominent and curved. People with this type of nose do not care what others think of them and work very hard to achieve their goals.

The snub nose is relatively smaller than the other types, but it is not protrusive at all in any direction. People with this nose are a bit short-tempered, aggressive, and react very quickly. Despite this, they are full of fun and energy.

This type of nose is long with a concave slope and is lifted upwards at the tip. People with this nose shape are considered to be very positive and enthusiastic and share a very strong bond with their family and friends.

This nose is somewhat similar to the snub nose, but it is a bit long, narrow, and symmetrical on both sides. People with this nose type are considered to be very attractive.

So, what is your nose shape? Did the description match your personality?