How to Make Your Nose Look Smaller Without Surgery 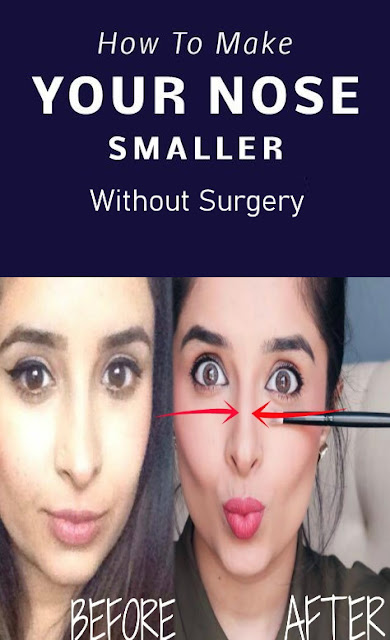 I've always had something of a big nose. I'm no Barry Manilow, but unfortunately my nose is somewhat 'wide' and my big grin only serves to increase its width meaning that it takes up a bit more of my face than I would ideally like a lot of the time.

When I was younger this used to upset me more than it does now (because I have a self-esteem these days that borders on full-blown narcissism) and it didn't help that my mates came up with the helpful nickname 'schnout' for me. What are friends for? =)

As such then I decided to look into whether or not it was possible to reduce the size of my nose without undergoing painful/embarrassing surgery and of course I found I wasn't alone in this plight and that others were out there trying the same thing. Of course they had suggestions and I decided these were worth a try, so the question is – did any of these ideas work? Here I'll present you with my findings and how useful they turned out to be.

The first thing I found were the many claims that you could reduce the size of your nose simply by squeezing it and because it's made of cartilage it follows that it would be more malleable than bone and that this would be more likely to have an effect.

Upon my first attempt I must admit that it worked and my nose did look a little slimmer. I held the sides in near the top firmly for around two minutes so that it was just uncomfortable and when I let go I had a less pronounced widening up the top there where the problem area was. I have to admit that this did lead to a thinning of my nose that was noticeable to touch and that was just about noticeable to look at. The problem with that immediate effect though was that my nose was also very red which actually meant it drew more attention to itself – not ideal.

The idea is that you do this for a few minutes every day, and that by doing so your nose will ultimately become permanently smaller but of course I never managed to commit myself to hurting my nose on a daily basis and forgot after a few attempts. To me it seems rather unlikely that most people would remember to do this either, and using your fingers is just a quick way to develop spots on your nose and cause bruising as you won't be able to get an even grip.

The next thing I found was the Nose-Up or Nose Magic (a variation on the same concept) which is essentially a clip designed to do the squeezing for you that you wear for 10-15 minutes a day. Now I'm a little sceptical as to whether this can really work – as cartilage may be softer than bone but it's still not going to magically dissolve, but looking online there do seem to be some fairly happy testimonials that look relatively legitimate. What I've garnered from the reviews is that it takes about a month to have any effect and is only really useful for those who want to make the end of their nose slimmer. Still though, for $1 or whatever it is on eBay it might be worth a try for the very desperate – just don't expect miracles.

Finally the other option is to use makeup. Now the idea here isn't to conceal your nose out of existence (if only), but rather to create an optical illusion of sorts by using 'shader' or a slightly darker foundation down the sides of the nose. This way you make it look as though your nose more steeply slopes to either side and make the ridge down the middle look narrower. It's a temporary effect, and one I wasn't willing to try as a man, but for women who are willing to put the time in it can be a very effective technique. This is called 'contouring' and to be honest is the only real option that is guaranteed to work.