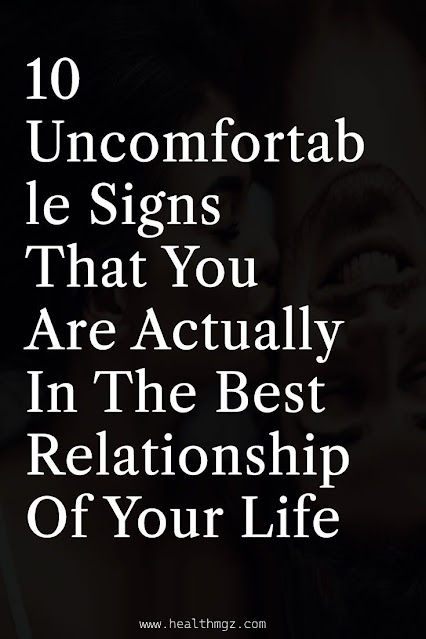 1. You’re okay with the fact that you’re not making decisions based solely on your needs and wants anymore.

It’s a strange feeling – to think that your life is no longer at a point where you could just pick up and move across the country or quit your job to travel the world if you felt like it, without it having a huge effect on another person. But although it’s a strange feeling, it doesn’t necessarily bring you anxiety or frustration. It’s actually rather freeing and exciting, to feel like you’re putting your energy towards forming roots with a person who supports you, encourages you, and wants to experience adventure together instead of separately.

2. You feel more vulnerable than you ever have before.

But only because you’ve found someone who knows you and understands you more deeply and more profoundly than anyone else ever has.

3. You’ve become less afraid of getting into arguments.

In past relationships, conflict was always something that you avoided like the plague. Sometimes it was just easier to sweep the problem under the rug or to deal with it passive-aggressively. But in your current relationship, you’re not afraid to fight or argue, because you have enough confidence in the two of you as a partnership that you know you can battle it out in a healthy way. The fighting itself is not fun or enjoyable, and sometimes it can even be painful, but it’s not something you’re afraid of – because you have faith in the two of you and your ability to communicate and work through a problem until you get to the other side.

4. And you’re not obsessed with being right all the time.

Sure, you’re human and it feels way better and way more validating to be in the right than to be in the wrong. But at this point, your relationship is so much more important to you than your own pride. When you’ve done something wrong and you know you’ve screwed up, it sucks to have to apologize, but it’s always worth it when you remember that you’re fighting for something that’s way more important and way more fulfilling than your own ego.

5. You’re okay with ‘taking turns’ being the selfish one.

And not in an unhealthy, competitive, measuring way. You simply know that this is a supportive, loving relationship, and that both of you are okay with sometimes being the one who makes the sacrifices, and sometimes being the one who asks the other to make sacrifices for them. Although they may sometimes be difficult choices, you are both guided by the trust you have for each other, and the faith you have in the fact that each decision is being made out of mutual respect, compassion, and love.

6. You can feel yourself changing.

And not in a way where you feel like you’re losing your identity or giving up your sense of self. You just feel like you’re finally with a person who is opening up your eyes to things and ideas and concepts you’ve never experienced before, and you can tell you’re doing the same thing for them. And although it’s sometimes unnerving to watch someone have this strong of an impact on you, it’s also a really lovely experience: you feel no pressure to change who you are, but you also feel the thrill of being with someone who introduces you to sides of yourself that you didn’t even know existed.

7. You feel challenged by them.

You feel heartened, cared for, and loved for exactly who you are. But you also have an absolute faith that you have found someone who makes you want to be a better person every single day – someone who will cause you to grow, to learn more about yourself, and to be supported and encouraged on your path to becoming the person you’ve always wanted to be.

8. You don’t put yourself first anymore.

Not in the sense that you don’t value your own time, identity, sense of self, mental health, goals and dreams, etc. But in the sense that you don’t think of your life only in terms of what’s best for you and what would make you happy. Now, you think about it in terms of what’s best for the two of you as a team. You still feel confident that you are your own independent and self-reliant individual, but you are also okay with the fact that everything’s not just about you and your desires 24/7 – it’s about the two of you working together to support each other and love each other to the best of each of your abilities.

9. Their worries, stresses, pains, and fears become your own.

Because you two are so connected, and when one of you bleeds, the other bleeds too. When one of you is in pain, the other is in pain, too. This relationship is unlike any you’ve had before because you both have truly jumped fully in – you’re there for each other when things are great and easy and fun, but more importantly, you’re there for each other when things get hard and ugly and scary. It’s an unsteady feeling, to be that affected by someone else’s wellbeing and happiness, but it’s also a feeling unlike any other – knowing that you care about and love someone so much that their joys are your joys, but their battles are also your battles, and vice versa.

New relationships and flings can be addictive – they’re thrilling, they’re exciting, they’re breathtaking, and they’re fresh. But after experiencing the highs for long enough, you’ve come to learn that they simply aren’t sustainable, and what matters more is what is left after the novelty has faded. And at this point, the fact that you’re less affected by the ‘highs’ and more interested in the steadiness and commitment side of things doesn’t scare you anymore. Because it’s so exciting in its own way: you’ve found someone you want to have ordinary days with, someone who keeps you company and makes you feel happy even when things are boring, or routine, or stressful, or unglamorous. You wouldn’t change what you have just to get another high, because it couldn’t measure up to what you’ve found: a partner to build a life with.