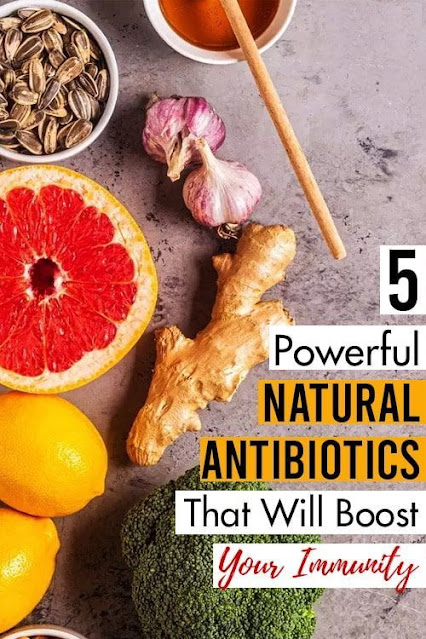 Honey is used as an antibacterial drug (antibiotic) for a very long time, before synthetic antibiotics were developed in cultures around the world for treating various ailments. Today it is scientifically proven that this sweet medicine has antibacterial properties, can effectively cure skin rashes, treats burns and scratches and cleans the teeth and mouth from bacteria. Honey is also effective for treating ulcers and blisters.

Even today, dentists use clove oil as oral antiseptic and for disinfecting the root canal (very well known smell which can be felt in every dental office). Eugenol, which is consisted in cloves, is considered as the primary antimicrobial compound. Many scientists around the world have documented material to prove this statement.

If you want to get rid of tooth ache, chew a clove for couple of minutes. The pain will be completely gone within two hours.

It has proven that garlic can cure and help in treating many diseases. One of garlic’s ingredients is called allicin -- compound which has antibacterial and anti-inflammatory properties. Garlic itself has a defense mechanism against harmful attacks. Scientists have shown that allicin destroys many bacteria, including the most dangerous ones which are often resistant to standard antibiotics. Garlic can effectively cure toothache (chopped a clove of garlic and place it onto the ill tooth), cough, sore throat, as well as many other diseases or infections.

Sage is especially good for treating cervical infections, respiratory tract and mouth infections. It is also excellent for treating gut infections and intestinal problems. Sage can help in reducing increased body temperature and fever. It can also reduce pains which occur in the early phases of cold and flu.
It has been scientifically proven that sage has moderate but extensive antibacterial and antiviral properties and now it is regularly used in production of many modern medicines.