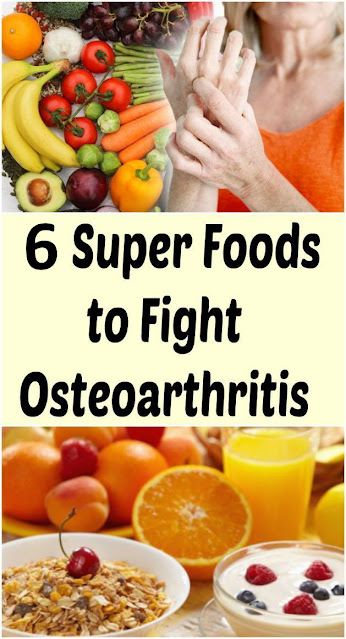 Osteoarthritis is actually the most common chronic joint problem, caused in part by wear and tear that reduces joint cushioning and cartilage, leading to pain and stiffness. It affects roughly 15-million Americans.

While there are medications and other treatments as well as lifestyle changes to address the symptoms, there are also dietary changes that can make a difference. Here are six foods recommended for osteoarthritis patients that have been shown to reduce the related inflammation…

Fish and fish oils contain Omega-3 fatty acids, which Arthritis.org says are powerful inflammation fighters. “Omega-3s interfere with immune cells called leukocytes and enzymes known as cytokines, which are both key players in the body’s inflammatory response,” notes the source.

Meanwhile, the best fish for Omega-3 acids according to the source are Atlantic mackerel, lake trout, salmon, herring, sardines, and Albacore tuna. These choices are also relatively low in mercury, it adds. You could also turn to Omega-3 supplements, although the source says your body may not absorb these acids from pills as well as it would directly from the source.

Apparently eating certain fruits and vegetables will go right to your knees – if they are affected by osteoarthritis. Healthline.com notes that eating a steady diet of these vitamin-rich natural foods can help reduce the related symptoms.

The source explains inflammation causes “free radicals,” which are cell-damaging molecules in response to bodily toxins. The cushioning in the knees is especially vulnerable to these free radicals, it adds. Antioxidants help form a shield against these free radicals, slowing the progression of osteoarthritis. The source recommends eating fruits and vegetables high in the antioxidant Vitamin C (like citrus fruits, raspberries, strawberries, bell peppers and broccoli), Beta-carotene (kale, sweet potatoes, lettuce, apricots), and bioflavanoids (onions, cherry tomatoes, blueberries, and apples) to combat the condition.

You may associate inflammation with heat, and obviously spices can be associated with heat, so how can these be good for osteoarthritis? Well, it turns out they are, according to the Arthritis Foundation. The source urges you to use more spices in your cooking and not overlook them for this purpose – also, flavor!

However, not every spice has to burn your mouth to have benefits – there are many milder spices to try in delicious dishes. Keep these in mind: turmeric, a yellow spice commonly paired with pepper; ginger, which works in sweet or savory meals as well as tea; cinnamon, which the source says can be added to oatmeal or smoothies; and cayenne, which is actually the hottest of the bunch.

Along with pure ginger tea as noted earlier, you could also try having a nice cup of green tea to try and quiet your osteoarthritis symptoms. According to PreventArthritis.org, a study on mice with conditions similar to osteoarthritis shows little evidence of bone erosion when green tea polyphenols were added to their drinking water.

Yet another study cited by the source found that adding active ingredients from green tea in human cartilage cell cultures slowed the chemicals and enzymes that lead to cartilage damage. You can brew hot green tea from a bag, or you can drink a bottle of green tea to get the benefits, it adds.

If you’re experiencing the pain associated with osteoarthritis, you may want to chomp down on a peanut butter and jelly sandwich, suggests The Arthritis Research Institute of America. The key to peanut butter is its Vitamin B3 (niacin) content, which has been found to be “more effective than a placebo in improving flexibility and reducing inflammation”.

You’ll get additional benefits from consuming B3 – it’s also beneficial for healthy skin and proper circulation, adds the source. It can also help maintain nerve function, enhance memory, lower cholesterol, and aid in digestion, it adds.

Okay, so this may not be the most economical way to address osteoarthritis, but it might also be the most decadent way. The key ingredient in lobster in fighting inflammation is Vitamin E, which may help reduce symptoms of knee osteoarthritis.

Meanwhile, we did a quick check to see which foods contain the highest levels of Vitamin E, and surprisingly, lobster doesn’t crack the top 10 by serving size, at least according to HealthAliciousNess.com. The ones that did include cooked spinach, almonds, sunflower seeds, avocados, shellfish (shrimp, crayfish and oysters), rainbow trout, olive oil, broccoli, gourds (pumpkin and squash), and kiwifruit.