Home Unlabelled When Should You Get Married, According to Your Zodiac Sign?

When Should You Get Married, According to Your Zodiac Sign?

Your fate is not set in stone, but according to astrologers, each sun sign of the zodiac has an age they should ideally get married at. Researchers looked at beliefs about chance or fate and found that ‘The practice of astrology can be traced in most if not all human societies, in most time periods. Astrology has prehistoric origins and flourishes in the modern world, where it may be understood as astronomy practiced by the people.’ 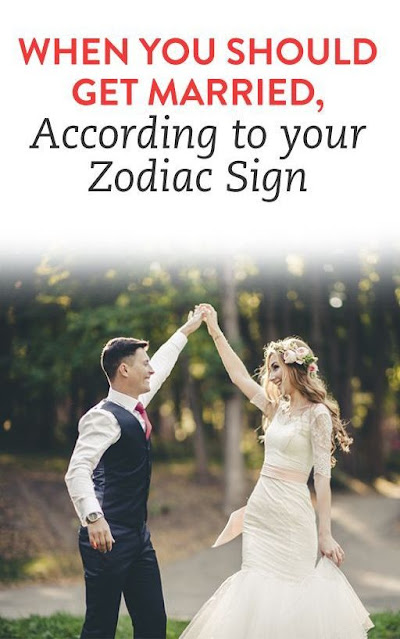 Read on to find out when, if ever, your zodiac sign says is the best age that you should plan to take the plunge and stand at the altar at your wedding.

HERE’S WHEN YOU SHOULD GET MARRIED BASED ON YOUR SIGN:

Aries as a group like to have a companion throughout their life, although they also like to think they are very independent. Aries is likely to marry early in their 20’s and be blissfully partnered.

Home stability is a preference for Taurus. Love, marriage, and a happy partner at home is a goal that Taurus will likely achieve early in life near their mid 20’s.

Gemini is a zodiac sign that hopes for love that will exceed their romantic dreams. Gemini will seek their romantic twin early on in life but will wait to marry until mid-30’s.

Cancer is lovable, not crabby, and their romantic marriage partner will find them irresistible around their early 30’s.

Lions love to pursue their love interests, but the one they marry will take a while to hunt down. Leo will wait until later in their 30’s to be sure that all their hunting for a mate is over.

Virgo seeks a homey happiness and will look to marry early in life, in their mid to early 20’s. Virgo will find an easy happiness in domestic life.

Libras are in love with love, and so many people are worthy of their love, but this zodiac sign will be happy to marry early in life around age 20. Libras love to read their astrology, and, like other signs, often feel that they closely relate to what is written about them.

Toughing it out and being fiercely independent until late in life is likely for the zodiac sign of Scorpio. However, the passion that this sign can feel for a mate may make them marry early. Either in their mid 20’s or late 30’s is when Scorpio could marry.

Do not try to trap Sagittarius romantically if you might hope to marry them in the future. Sagittarius wants to stay free, so a looser commitment than marriage may be what is needed. If they marry, Sagittarius could see themselves marrying at age 30.

Capricorn is a zodiac sign that wants to feel comfortable and secure with a partner before deciding on marriage. The Capricorn mate wants to feel you out and make sure that you can handle them at their worst, before they let you have their best. Getting married at age 25-30 is just about enough time for this zodiac sign to find the right spouse.

Aquarians have high levels of energy, enthusiasm, and vitality. This zodiac sign should wait to get married until they’ve aged and matured a bit, but they will likely rush into things in their early 20’s. Being overwhelmed with passion isn’t a bad thing when you’re young or old.

Intense relationships can be scary to Pisces, so getting married is usually delayed until they feel more confident about the lasting power of the relationship. Pisces will look to wait to marry until well into their 30’s.

Researchers say of astrology ‘The Western tradition, which originated in Mesopotamia and was developed in the Greek world, has been most studied by academics. However, India is also home to a tradition, which has survived in a continuous lineage for 2,000 years. Complex systems of astrology also developed in China and Mesoamerica, while all other human societies appear to seek social and religious meaning in the stars.’

The zodiac signs will find the love they are meant to have in due time. The wheel of fortune may bring you someone whom you desire, but what age you get married at, or if you decide to get married, is something that only you get to determine.