Home Unlabelled Your Earwax Can Tell How Healthy You Are. What Color Is Yours?

Your Earwax Can Tell How Healthy You Are. What Color Is Yours?

Earwax is a sticky substance that is created by the organism to prevent the bacteria and dirt from entering the ear canal. Moreover, this disgusting buildup in the ears actually keeps the ears clean, healthy and functional.

Scientists explain that the earwax itself is a combination of long-chain fatty acids, squalene and alcohol.

Furthermore, the earwax can tell how healthy you are, so next time you clean your ears, check the color of this sticky substance. 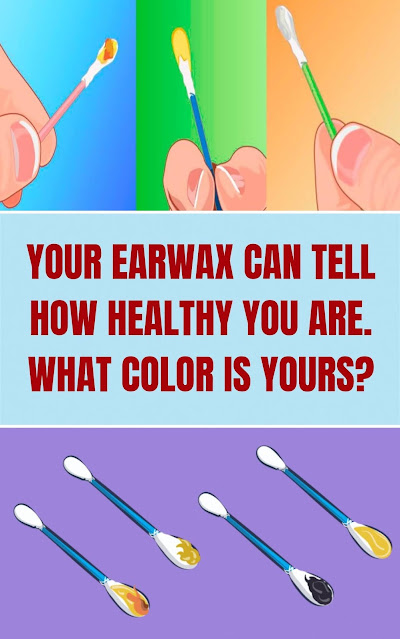 Yellowish and sticky earwax is the most common type of wax at adults. Its wet and sticky texture keeps the the ear canal clean and also prevents it from drying out and becoming itchy.

Despite the fact that gray earwax looks unusual, if you see it on your cotton swab, there is no need to worry. Medical experts explain that the gray color of earwax is a result of the ear’s natural cleaning process. However, in case if the wax is dry and brittle and you experience itchiness in your ear, it could be a sign of eczema. If you notice these symptoms, it is highly advisable to visit a doctor.

Pale yellow earwax color is common at kids. It is important to mention that children tend to produce much more earwax than adults, but over time, as they get older, the production of earwax gradually decreases.

If the earwax has a darker color and it is more sticky than usual, it indicates that the   organism is perspiring more than usual. Namely, the darker the color of the wax is, the higher the probability that this extra sweat will cause unpleasant body odor. However, sticky and dark earwax is completely healthy.

Human body produces more earwax as a result of chronic stress and anxiety. In addition to that, heavy sweating can also lead to an increase in production of earwax. Doctors explain that increased production of earwax can block the ear canal and cause temporary hearing impairment.

Therefore, if you notice that your earwax is dark and thick, make sure to clean your ears regularly and thus avoid any issues.

Dark and thick earwax also is indication that you should slow down and try to relax. Also, try some relaxing methods and reduce the stress.

Dark brown or black earwax looks really scary but there is no need to worry. Dark color of earwax usually occurs as a result of an overproduction of wax. Also, this color of the earwax might be indication that the wax has been in the ear longer because increased contact with oxygen changes the color.

It is completely normal if occasionally you notice that earwax comes out from your ears because it is a part of the natural cleaning process of the body. However, if you notice that wax pours out of your ears in large amounts and contains pus or blood, it is a sign of a perforated eardrum. If you notice this, you should seek medical attention – immediately.

Sometimes, the old earwax looks like dried blood. However, if you notice bloody earwax you should get a medical attention as it might be indication of a perforated eardrum.